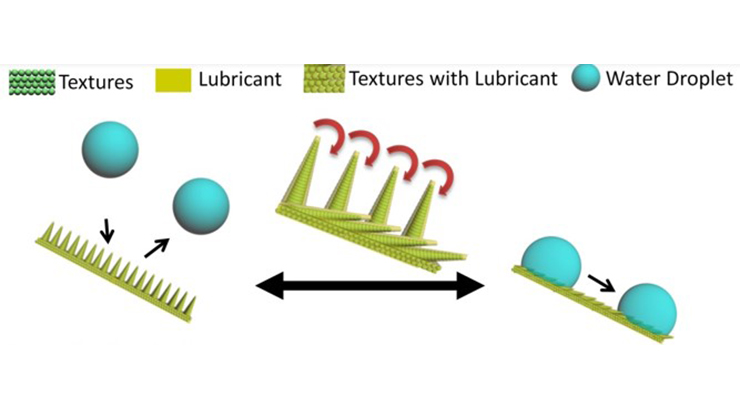 Concept of a transformable surface

The invention covers the design and fabrication of a surface that can switch rapidly from the superhydrophobic and slippery states. An array of magnetically responsive hierarchical polymeric micropillars are controlled by the direction of external magnetic fields. In the superhydrophobic state, the micropillars are oriented vertically so that a liquid droplet only touches the tips of the hydrophobic micropillars. In the slippery state, the micropillars lay flat against the substrate under an external magnetic field, where an impacting droplet touches a nearly continuous film of lubricant-infused surface. The ability to quickly and repeatedly switch between superhydrophobic and slippery states allow the maintenance of liquid repellency in various changing environmental conditions. An important function is the ability to restore its liquid-repellent function even when water droplets are pinned onto the surface, by changing the surface morphology that results in the depinning and sliding of the liquid droplet.

The switching between the two states is highly repeatable without noticeable failure even after >30,000 cycles. In addition to programmable fog harvesting, the ability to dynamically alter liquid-repellent properties on-demand may open up new opportunities for smart liquid-repellent skin, programmable fluid collection and transport, adaptive drag control, thermal regulation, and controlled-release devices.

The inventors believe the next step would be demonstrations (on-site or video) as well as the transfer of samples for evaluation under an appropriate contractual agreement.