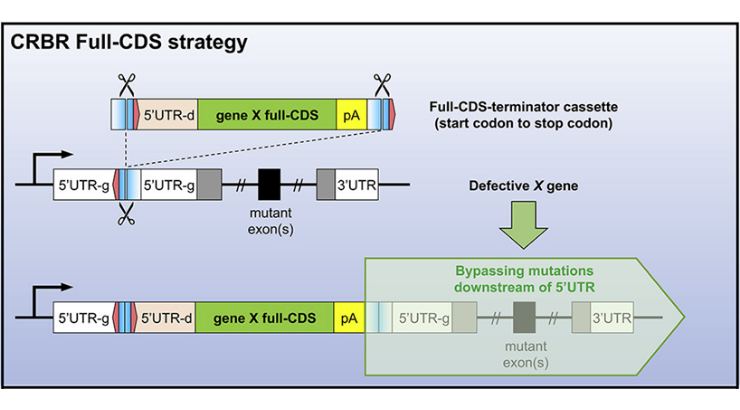 With the development of CRISPR/Cas9-mediated gene editing technologies, correction of disease-causing mutations has become possible. However, current CRISPR technologies have a number of shortcomings. For example, current gene correction strategies preclude mutation repair in post-mitotic cells and a unique repair strategy must be designed and tested for each mutation that may occur in a gene. Penn State Inventors have developed a novel CRISPR-mediated gene correction strategy, named Co-opting Regulation Bypass Repair or “CRBR”, that maintains endogenous regulatory regions but bypasses a spectrum of genetic defects. CRBR utilizes homologous independent targeted insertion, part of the NHEJ repair pathway, to insert a cassette that contains the full gene coding sequence plus a stop codon downstream of the target gene’s promoter. Expression of the CRBR cassette, controlled by the target gene’s native promoter and regulatory elements, is equal to that of the wild type gene and can be used to rescue any coding sequence mutation as well as splice-site mutations. Due to use of the NHEJ pathway, CRBR can be utilized in both mitotic and post-mitotic cells/tissues.

To demonstrate the utility of CRBR, the inventors targeted two genes that are important for pancreatic beta cell function and glucose homeostasis: eukaryotic translation initiation factor 2 alpha kinase 3 (PERK) and insulin. Using CRBR, the inventors successfully rescued two independent Perk knockout alleles in mice. The inventors further demonstrated the potential of CRBR for human gene therapy by integrating a GFP cassette downstream of the human insulin gene in human cadaver islets. The inventors observed GFP expression under control of the endogenous insulin promoter in a large percentage of pancreatic beta cells. Together, initial experiments confirm that CRBR may be used in the future to correct deficiencies in genes and may be especially useful in autologous cell therapy.