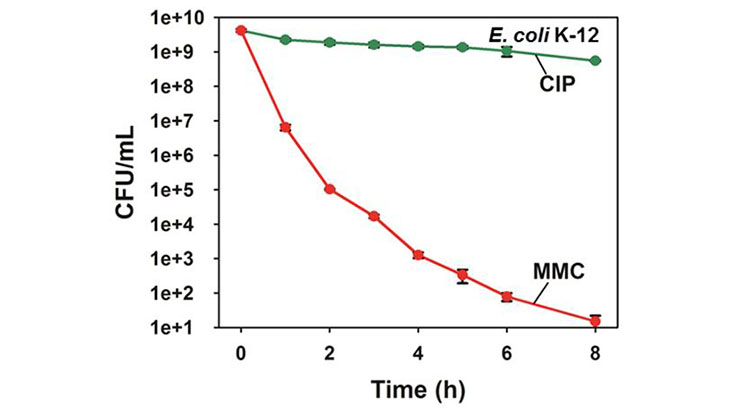 The researchers have discovered an FDA-approved chemotherapy agent, mitomycin-C, which passively diffuses into cells. A specific functional group of the compound is reduced spontaneously within the bacterial cytoplasm and kills persister cells by crosslinking DNA. The results show the agent’s broad-spectrum activity against growing, non-growing, and persister cells in an animal model as well as in a wound model. Compared to ciprofloxacin, the agent is 2,300x more effective against exponentially-growing E. coli cells, 150,000x more effective against midstationary-phase cells in a buffered medium, and kills 100,000x more biofilm cells. The researchers examined the viable but nonculturable state (VBNC) – a metabolic state closely related to persistence. The researchers found a 7x increase in VBNC mortality compared to ciprofloxacin.

This invention is a novel mode of action to kill persister cells; persister cells play a leading role in chronic infections. The invention has applications as a therapeutic to treat the seventeen million new biofilm infections every year in the USA, which leads to 550,000 fatalities. It could be used in the treatment of chronic infections from implanted medical devices such as catheters and artificial joints, urinary tract infections, middle ear infections, and fatal lung disease such as cystic fibrosis and tuberculosis.