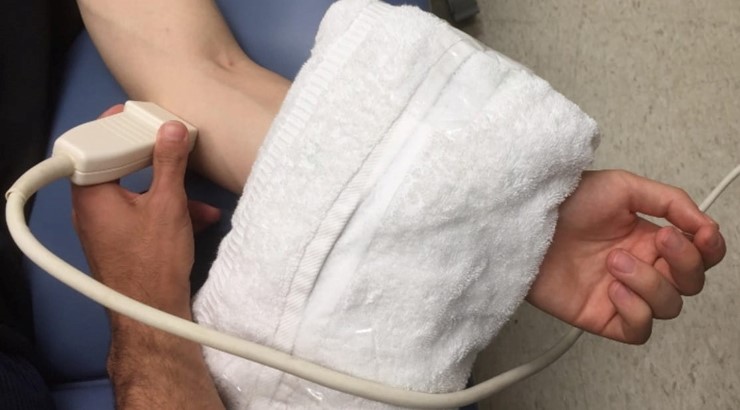 The invention pertains to a new ultrasound method called continuous shear wave elastography (cSWE), which uses acoustic radiation in a series of push pulses to measure the relative stiffness of soft tissues in animals and humans to diagnose diseases or injuries such as muscle tears, breast cancer or liver fibrosis. Each push pulse induces a shear wave in the tissue. The sum of sequentially induced shear waves forms a continuous, harmonic shear wave of a known, controllable frequency (50 – 400 Hz) in the tissue by a single array transducer. The transducer is used for both pushing of the tissue and the detection of the shear wave. As a result, the invention uses the speed of the shear wave propagation to provide a 2D fully quantitative map of tissue mechanical properties. The figure above shows a transducer transmitting a series of push pulses in the tissue at a chosen location.

cSWE has been shown to work as well as magnetic resonance elastography and can utilize the same 2-D mapping software and hardware implementations, but cSWE is expected to be about an order of magnitude cheaper. cSWE requires only a single clinical transducer to induce and monitor the shear wave, which reduces costs and simplifies its use. cSWE has applications in diagnosing diseases such as liver fibrosis and breast cancer where tissue stiffness is important, but this technology is also useful for measuring the viscoelastic properties of tissues.

The inventor has established proof of concept on commercial gel phantoms that have a known stiffness value. Tests on pig livers are currently underway. Seeking research collaboration and licensing opportunities.