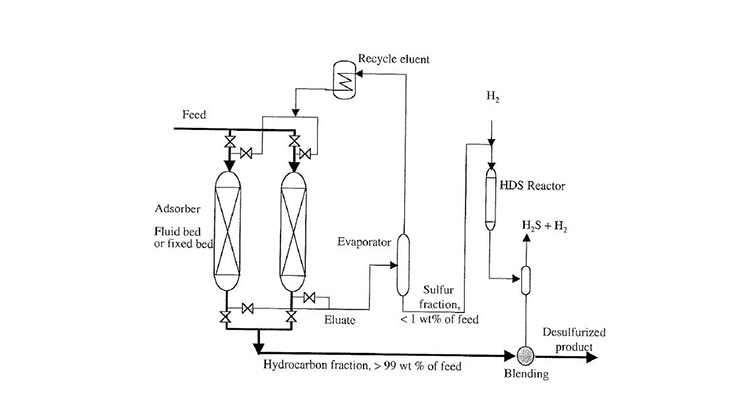 A novel process for deep desulfurization of liquid hydrocarbons, which combines a selective adsorption process of the sulfur compounds and a hydrodesulfurization process of the concentrated sulfur fraction. The sulfur compounds in fuels are first adsorbed on the adsorbent in an adsorber, then recovered by solvent elution. The spent adsorbent is regenerated via solvent elution followed by removal of the solvent. The eluate is sent to an evaporator to recycle the solvent and to obtain a concentrated sulfur fraction, which accounts for less than 1 wt percent of the whole fuel. The concentrated sulfur fraction is hydrodesulfurized in a small HDS reactor. Then, the HDS product is blended with the hydrocarbon fraction from the adsorber.

This process has significant advantages over other methods such as IRVAD, S Zorb, and TreND. This process works at ambient temperature and ambient pressure. There is a low hydrogen consumption in this process. There is easy regeneration of the spent adsorbent, low investment and operating cost, and little to no octane penalty.