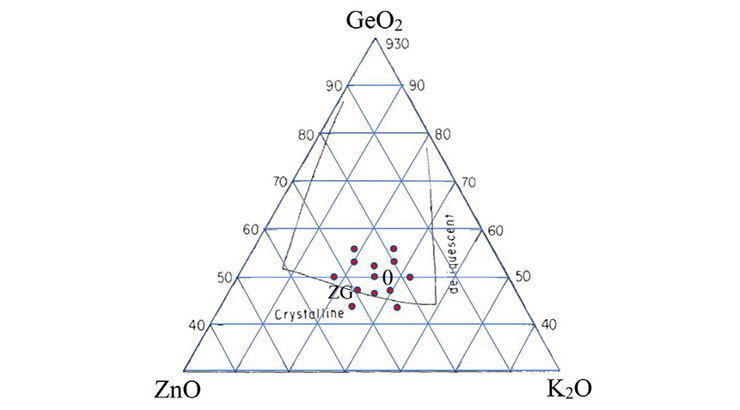 As a lower cost alternative to germania, germanosilicate glasses are well known for their high transparency in the visible and near-IR regions, making them desirable for fiber and planar waveguides, optical amplifiers, and solid-state lasers. Zinc oxide (ZnO) has drawn much attention in recent years due to its optical and electronic properties, such as UV-shielding and a wide direct band gap, in addition to being non-toxic and relatively low cost. Now, Penn State researchers have added ZnO into germanosilicate glasses for the first time to produce novel compositions with interesting properties. A variety of compositions have been prepared and their composition-property relationships characterized extensively, including measurements of density, refractive index, transmittance, cut-off edge, glass transition temperature, and thermal expansion coefficient.

The ZnO-containing germanosilicate glasses have a refractive index value close to that of pure germania glasses (at a much lower cost) and significantly higher than that of soda lime silicate glasses, allowing for lower-curvature lenses. Owing to the presence of ZnO, the cut-off edge is significantly higher than that of soda lime silicate glass, which endows these glasses with UV-shielding properties. Finally, due to their high transparency and good glass-forming ability, these glasses have potential applications as optical components in a variety of systems.