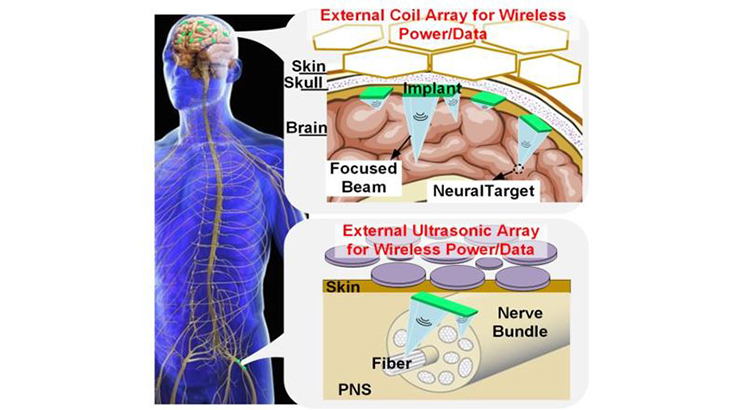 An embodiment of the invention

An implantable ultrasonic device for dual-mode microscopic ultrasound stimulation and hemodynamic imaging has been developed that measures changes in blood flow induced by the neurovascular coupling of the vessels surrounding activated neurons. A minimally invasive wireless implant, equipped with an array of ultrasonic transducers for both the central and peripheral nervous system (CNS and PNS), eliminates the need for penetration into neural tissue. The implant utilizes ultrasound for neuromodulation, imaging, power delivery, and telemetry. In imaging the brain activity, the number of transducers (a receiver or transmitter) and number of pulses in each firing may be variable. To achieve both neuromodulation and imaging within the 3D structure of neural tissue, ultrasonic beamforming with a 2D transducer array is used.

The invention administers minimally invasive deep brain stimulation, which may ameliorate Parkinson’s disease symptoms and have utility in examining neurological conditions such as dystonia, epilepsy, depression, and obsessive-compulsive disorder, without the need to penetrate into neural tissue. It also monitors brain activity by imaging hemodynamic changes (changes in blood flow within neural tissue) induced by the neurovascular coupling in the vessels surrounding activated neurons, providing greater imaging resolution compared to transcranial focused ultrasound.

The whole technology should be developed over the next several (3-4) years. Seeking research collaboration and licensing opportunities.