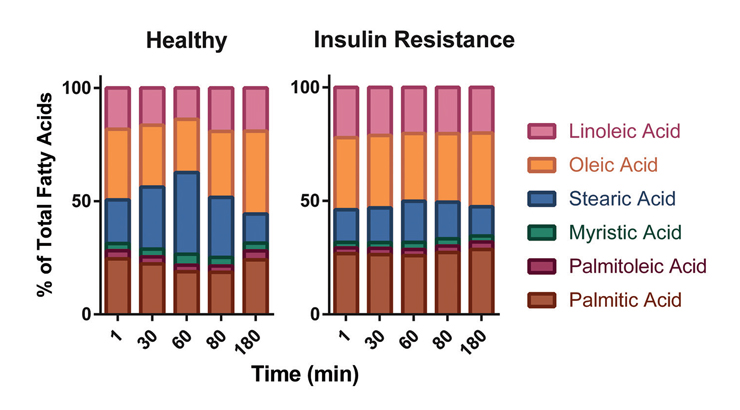 This invention relates in certain aspects to the metabolism of non-esterified fatty acids (NEFAs), specifically as they apply to the adipose tissue response to changes in circulating insulin. As known, insulin suppresses intracellular lipolysis in adipocytes, and poor suppression of NEFA release is directly related to adipocyte insulin resistance (IR). Until now, it was not known whether the insulin-mediated suppression is uniform for all fatty acids (FAs). We show time that NEFAs are differently trafficked by adipocytes in insulin resistant subjects, relative to NEFA trafficking in healthy control individuals. Thus, providing methods for IR diagnosis by analysis of NEFA trafficking at several time points, or even at a single time point, to identify IR individuals earlier than currently available tests.

Current tests for determining insulin resistant glycemic indicators of insulin resistance primarily rely on analysis of glucose metabolism alone. Furthermore, diagnosis of IR does not occur until an individual is already experiencing symptoms and pathology (e.g. obesity and/or diabetes). Thus, there is an ongoing and unmet need for an improved test that could identify IR before symptoms emerge and that does not rely on glucose metabolism alone. This invention is pertinent to these as well as other needs.