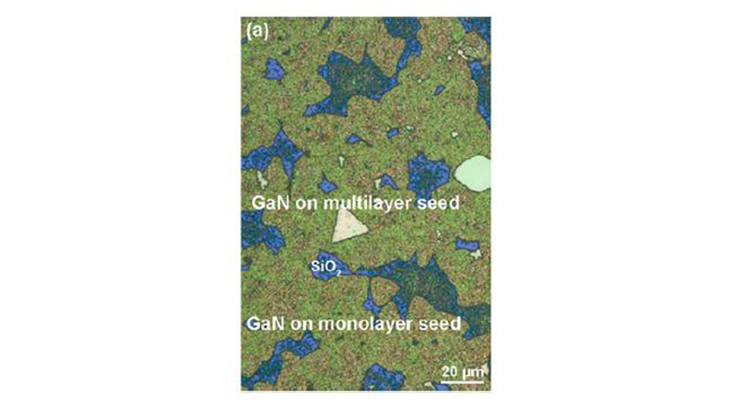 Methods of producing Group-III chalcogenide (GIIIC) seed layers have been developed, allowing for an ultra-thin nanocrystalline Group III nitride layer to form on amorphous substrates such as silicon or silicon dioxide. Effectively, the GIIIC materials are used as a precursor to group III-V semiconductors by growing the GIIIC materials on a substrate and subsequently treating the material with nitridation and/or exfoliation in order to produce a semiconductor with a band gap of about 1-3 eV.

Chalcogenide semiconductors are important materials for optical applications such as solar cells, thermal imaging, sensors and electrical applications such as LEDS and electrical devices. The present invention is a thin film that acts as a precursor to such semiconductors. This invention provides a more reliable and cost-effective method of synthesizing Group III-V semiconductors. Further, this invention enables high quality GaN synthesis on amorphous substrates such as silica and glass, thereby expanding the functionality of nitride materials and the library of possible growth substrates.