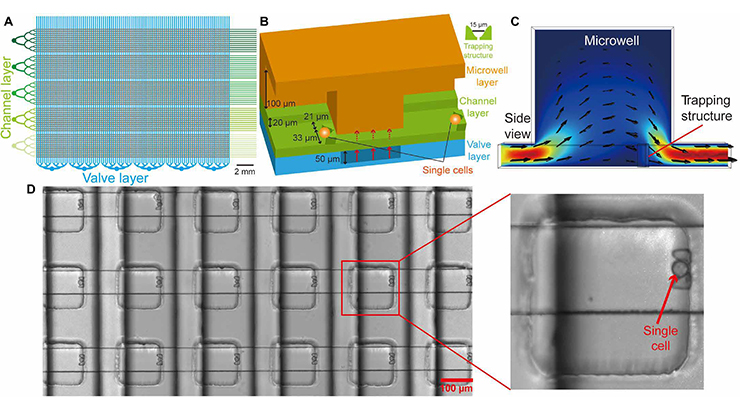 Inventors have created a second-generation microfluidic device that allows for single cell isolation and analysis. The microfluidic device has been designed to be compatible with and mount easily to commonly available inverted microscopes. The device includes five independent channels, each with 1140 wells. Channels are uniquely designed such that cell suspension flows through the channel layer of the device (detail not shown above). Cells are trapped within wells in a separate microchamber layer. The aqueous well environment is then isolated via backflow of oil through the channels.

The optimal flow rate is determined by cell density – the concentration of cells in solution. Inventors have obtained about 90% occupancy of a single cell per well for a range of cell densities. Inventors have additionally demonstrated that a number of human cell types/sizes are compatible with the microfluidic device.

Single cell assay may be broadly enabling for both basic research and therapeutic development. As an example, the inventors, leaders in the field of virology, have determined that there is substantial cell-to-cell variation exists in all quantifiable parameters of infection. The ability to track single cell response to viral infection, including rate of infection, allows for rapid characterization of therapeutic activity, including dose-response, for a large sample size. In proof of concept studies, the inventors determined therapeutic signatures for anti-viral therapeutics as well as drug combinations. Results are further described in recent Science Advances publication DOI: 10.1126/sciadv.aax4761

This novel microfluidic device is available for non-exclusive or exclusive licensing. The inventors additionally seek partners for independent testing and continued development of the device. Device prototypes may be made available for evaluation.