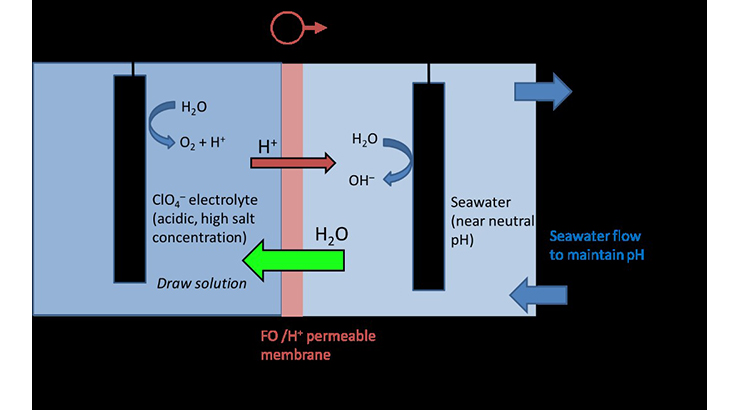 Schematic of the Invention

A method is invented here to allow for salty water to be used in a water electrolysis system for hydrogen gas production. A reverse osmosis (RO) or forward osmosis (FO) membrane is used to separate the anode and cathode chambers. RO membranes reject Na+ or Cl– ions but pass protons (H+). To avoid unwanted oxidation of chemicals in the anode chamber, an inert electrolyte containing perchlorate salts and perchlorate acids are used. As the perchlorate ions cannot appreciably pass the membrane or be oxidized, they can provide a stable anolyte for the water splitting electrode and not be lost into the catholyte. The membrane of this invention can be used to replenish water lost to water splitting, with water from seawater. The ionic concentration in the anolyte can be increased to be above that of seawater, so that water will be pulled into the anolyte chamber by osmotic pressure.

There is great interest in producing hydrogen gas by electrolysis using salty water off shore where wind or solar farms provide the electrical power. Hydrogen gas can be used as an alternative energy source, which should ease worsening climate change problems as it doesn’t produce harmful emissions, only water. Current method for electrolysis require highly purified water which is a very limited resource. Seawater’s abundance could upscale the electrolysis process to a marketable potential.