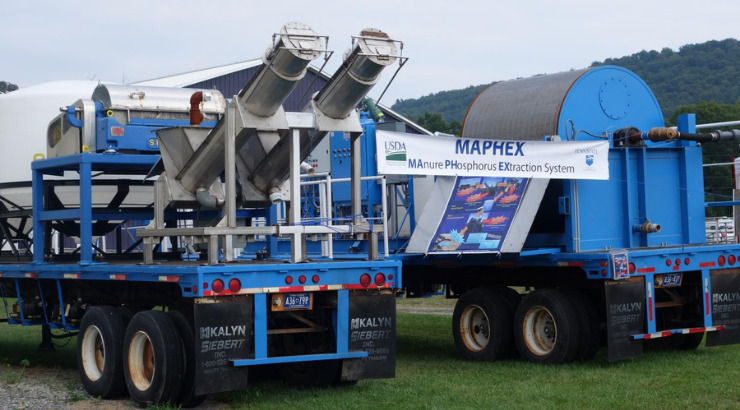 This imporoved MAPHEX system recycles the spent diatomaceous earth as the filtration media in a mechanical separation process using a rotating drum. Most of the N remains in the dissolved phase, which can be applied as liquid fertilizer for crops. The low P bulk solids are separated by an auger press and may be used for livestock bedding or compacted into a solid, compact, stackable form (i.e. brick) suitable as a conveniently transportable fertilizer. Chemical treatment converts the dissolved P into a particle which is subsequently removed along with fine solids between 0.5 and about twenty-five micrometer diameter and diatomaceous earth, which are rejuvenated by heat or an additional chemical treatment. The inventors demonstrated that recycling of the diatomaceous earth three times resulted in an approximate sixty percent (60%) reduction in the per gallon treatment cost.

This invention improved upon the MAPHEX system described in PSU Invention No. 4193 and related peer-reviewed publications. The inventors reduced the invention to practice using spent diatomaceous earth as the filtration media. However, the invention extends to other temperature resistant materials used in food and beverage production, water purification, as well as for production of pharmaceuticals, plastics, paints and biodiesel.