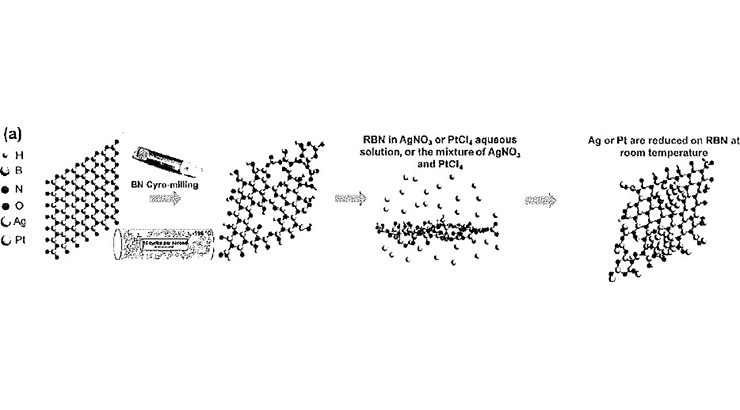 The inventors have invented a facile and scalable approach to mechanically activate hBN that reduces and confines the Pt cations into single atoms or the Ag Pt cations into sub-nanoclusters with atomically dispersed Pt atoms. Each Pt atom works as an active site, and the charge transfer is boosted by the adjacent Ag atoms, resulting in a higher TOF than that of the bulk Pt catalyst. ~100% of the Pt atoms are involved as active sites resulting in three-fold reduction in required Pt. The exchange current of atomically dispersed Pt is 2-3X higher than that of Pt in bulk form. The improvements in TOFs and exchange current over Pt-based SACs further imply that SAC is designed to maximize the utilization of each metal atom during the catalytic reaction. The synergic effect between the catalyst support and the metal sites offers robust binding sites to avoid metal migration and aggregation.

The inventors have experimental results demonstrated that after 3000 cycles in an acidic solution, the performance of the invention’s catalyst is comparable to that of the first cycle, thereby confirming that the catalytic clusters are robustly anchored within the support. The catalytic applications include hydrogen evolution reaction (HER), oxygen evolution reaction, oxygen reduction reaction, acetylene cyclotrimerization, HCHO oxidation, methanol oxidation, carbon monoxide oxidation and CO2 reduction.