Synthetic Defective Interfering Viruses for the Treatment of COVID-19 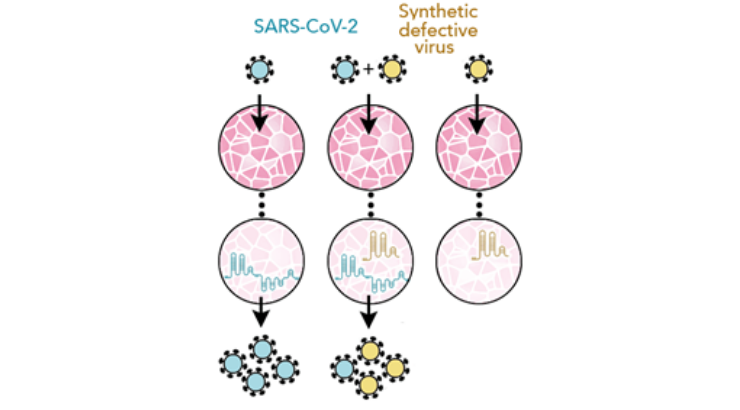 Viruses exploit host cells to produce viral proteins to replicate and infect other cells. The need to produce viral proteins leave viruses susceptible to exploitation by defective versions of themselves. A defective viral genome with deletions in protein-coding genes can replicate in cells coinfected with full-length viruses, but, due to its reduced complexity, the defective virus can replicate faster, out-competing the wild-type virus for resources and attenuating wild-type viral replication. Penn State inventors have created a synthetic defective interfering version of SARS-CoV-2 (DI-SARS-CoV-2).

DI-SARS-CoV-2 does not produce viral proteins and is only able to replicate in cells already infected by the virus. Initial cell culture experiments demonstrate that DI-SARS-CoV-2 replicates three times faster than wild-type in coinfected cells and reducing the wild-type viral load by half in 24 hours. However, without WT virus present, DI-SARS-CoV-2 degrades within hours. Experiments additionally demonstrate that the synthetic genome is transmitted as efficiently as the full-length genome, confirming the retention of required packaging signal. Penn State inventors are currently working to complete reduction to practice in animal models.

Current events highlight the ongoing need for therapies that limit or eliminate infection in those who contract SARS-CoV-2. While DI-mediated viral attenuation has previously been proposed for HIV and Influenza, the Penn State inventors believe that SARS-CoV-2, and more broadly coronaviruses, may be uniquely suited for this strategy due to long single strand RNA genome and relatively simple replication process.