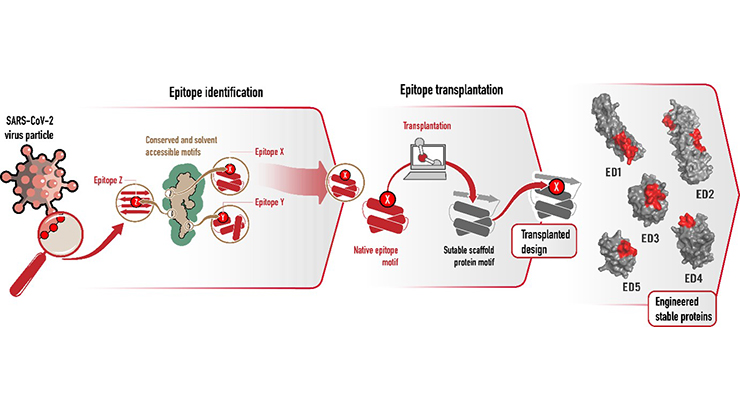 Researchers have developed engineered, highly stable small proteins featuring antigens transplanted from the conserved and surface-exposed regions of the SARS-CoV-2 Spike (S) protein. It has been shown that immunization of mice with these engineered proteins induce immune response, with immunized sera displaying spike protein binding activity. These proteins can be expressed in soluble form using an E. coli expression system, which is ideal for large scale production. These stable small proteins could potentially serve as vaccine candidates and could also be used in rapid anti-SARS-CoV-2 antibody detection assays, as they show good binding against anti-spike antibodies.

These immunogens have multiple applications, including rapid, sensitive, and inexpensive anti-SARS-CoV-2 antibody detection from human blood samples. The engineered proteins contain multiple spike-antigenic sites, which would improve the sensitivity and specificity of the test. Another major application of this technology is in vaccines. Currently available vaccines are limited by their storage temperature. The immunogens developed using this technology are temperature stable, which overcomes the storage limitations.